There has been an interesting trend in the last 10 years or so for many contemporary craft artists in the US to incorporate what has been called ‘new’ or more strictly ‘digital’ technology in their work. This might seem at odds with the very definition of craft practice with its emphasis on ‘hand work’, the primacy of the sensual and the honoring of traditions and historical precedents. On the other hand, it is in keeping with the trend in the US for contemporary crafts to align themselves with contemporary fine arts practices where the digital is very much in vogue. But is this embracing of the digital simply aping what’s perceived as ‘cool’ in the fine arts?  It seems clear to me, however, that the interest by contemporary craft artists in digital technologies arises from aspects of these technologies that are inherently congruent with craft discourses.

Perhaps I should define what I mean by digital technology in this context. Firstly, it includes recently more readily available digital production technologies such as CAD (computer assisted design) and CNC manufacturing (laser cutting, 3D prototyping, multi-axis milling, computer assisted jacquard weaving, etc.). It shouldn’t be any surprise that the crafts have embraced digital manufacturing techniques. Despite the widespread view that the crafts are mired in antiquated technologies the opposite is closer to reality. The crafts have always embraced new technologies, especially in the second half of the 20th century. Think about knitting machines, hand held electric power tools, jigger jolly machines, electric kilns, glass furnace technologies, personal websites and craft blogs. Craftspeople have always been avid inventors and early adopters.

Secondly, it includes digital audio, imagery and video. And thirdly, it includes works that feature the ‘nuts and bolts’ of digital technology and reference its ‘artifacts’ (pixelation for example); highlighting not only the content but also the technology that produces it. These approaches to digital technology (incorporating audio, video and digital imagery and referencing the technology and artifacts of digital technology) might at first seem an uneasy fit with the crafts; especially considering crafts strong connection to abstraction, the sensual, the traditional and particular methodologies and materials. However, I will argue that they are in fact closely linked to the conceptual core of the crafts.

The three aspects of digital technology which align most closely with the crafts that I would like to discuss are narrative, sensuality and anachronism. I will give examples from contemporary work in the US to illustrate my points. Many of these were shown together for the first time in an important recent exhibition ‘The New Materiality – Digital Dialogues at the Boundaries of Contemporary Craft’ curated by Fo Wilson[i] for the Fuller Museum of Craft (Brockton, Massachusetts)[ii].

A fundamental part of all of the crafts is sensuality.

Woodworkers for example, live and work with the fragrance of freshly sawn wood. They judge its properties through its sound and texture and assess the sharpness of tools through the sounds they make. Those who appreciate their work love the colors and grain of wood, enjoy a silky highly finished surface or the contrast made by a hard edge or a considered gouge mark. They smell the wood and feel empathy with the maker and with the natural world from which the wood came.

But like all artists there is only so much that you can do with one material, even one with incredibly rich histories and associations like wood. In her introductory essay to ‘the New Materiality’ Fo Wilson argues that “digital technology is part of a new materiality in the crafts”. Many contemporary maker’s use of video and sound comes from a desire to deepen the sensual connection that people have when encountering their work. 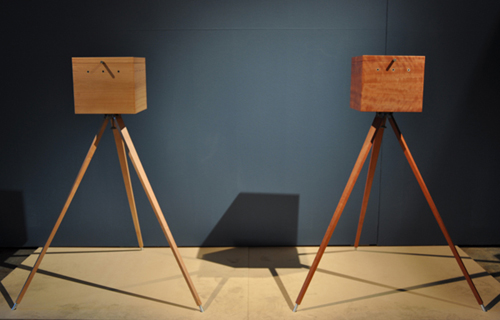 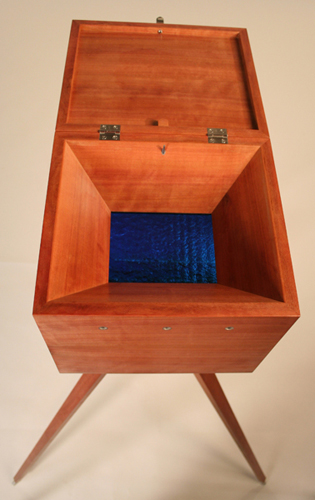 Under the Bridge - detail

My first piece to draw on the sensuality of digital technology was ‘Under the Bridge’. The tiny video screens within the paired cabinets of ‘Under the Bridge’ are like tiny moving brilliant jewels. The density of their color and the hypnotic movement of the ocean are a total surprise – it’s not what you expect to see at the bottom of a wooden box. Its like looking through a window or portal into another place or time. The videos provide a sensual intensity that the pieces would otherwise lack. 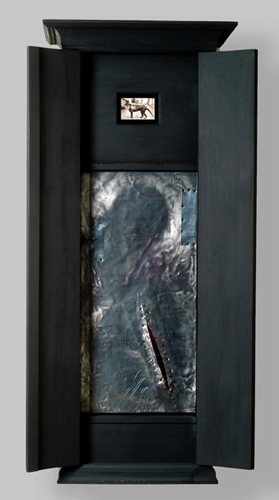 You don't know what you've got ‘til its gone (memorial for the Tasmanian Tiger), 2005

‘Under the Bridge’ was created for the exhibition ‘Convergence’[iii]. For the same exhibition Wendy Maruyama[iv] made ‘You don’t know what you’ve got ‘til its gone (memorial for the Tasmanian Tiger)’; a cabinet with a tiny imbedded video showing the painfully resonant archival footage of one of the last captive Thylacines pacing its tiny chicken wire enclosure. The piece also featured a small patch of fur emerging from a partially sewn up gash in a lead sheet. The fur and lead provided a very tangible contrast the evanescence of the video – talismans of a once physical presence, now only preserved in carefully sequestered fragments. 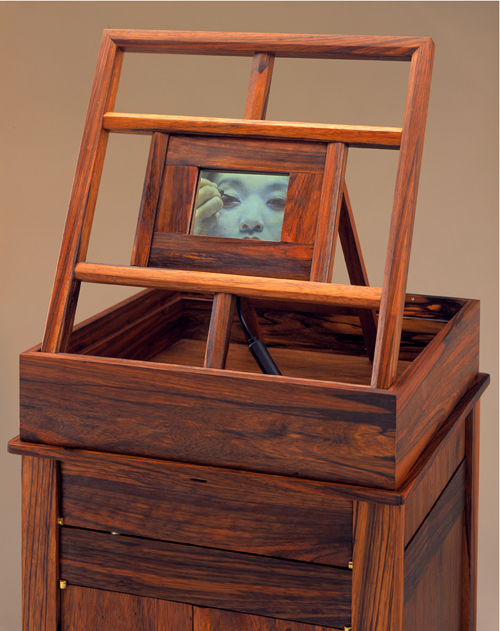 In a subsequent piece entitled ‘Vanity’[v], Wendy imbedded a video of her actress sister applying her geisha-like make-up slowly exaggerating the lines of her eyes to an Asian caricature. The video replaced the mirror in an immaculately crafted vanity case handcrafted in homage to traditional Chinese case pieces. The work questions the construction of Asian identity.

In her catalog essay Fo talks about craft being “endearingly tied to the skill of the hand”. Even though we talk about hand-made in opposition to machine-made, we use the word hand not in its strict sense of “made with our hands” as much as a signifier of embodiment. The crafts draw on our haptic or visceral experiences as much (or even more than) our rational mind – both for the maker and for the audience. The ‘hand’ stands in for the rest of the body. The use of digital technologies permits us to extend the sensuality of our work by provoking senses that might not be as easily accessible through traditional craft technologies.

This raises a further question of whether these senses are the ones we ‘should’ be accessing seeing that they are the ones already being over-stimulated by contemporary western society – through our iPods, iPhones, TV’s, and laptops. I propose that one of craft’s vital roles is the prioritizing of actions and senses that we are at risk of losing. By imbedding digital elements in the long standing sensual context of the craft media contemporary makers are drawing out the physicality of the ‘virtual’.

The ‘narrative’ in crafts often derives from the histories of making and the histories of usage and ownership of craft objects. Digital technologies lend themselves readily to deepening craft narratives. Video and photo imagery in particular are naturally associated in our minds with narrative and many craft artists are using both the content and form of these technologies to extend notions of narrative in their work. 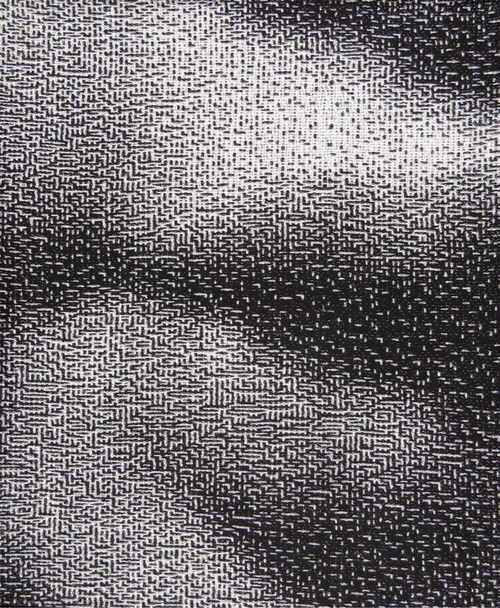 Lia Cook[vi] has used digitally manipulated family portraits in her work for many years. They are rendered in sumptuously detailed weavings created on digitally controlled Jacquard handlooms. There is a certain irony in the pairing these technologies as the jacquard loom is one of the oft-cited ancestors of the computer. The image is pixilated by the complex pattern and subtle color variations of the warp and weft threads. The photographic fragments, which have a dreamlike ephemerality about them, are digitized and then made permanent through the proven archival medium of woven cloth. 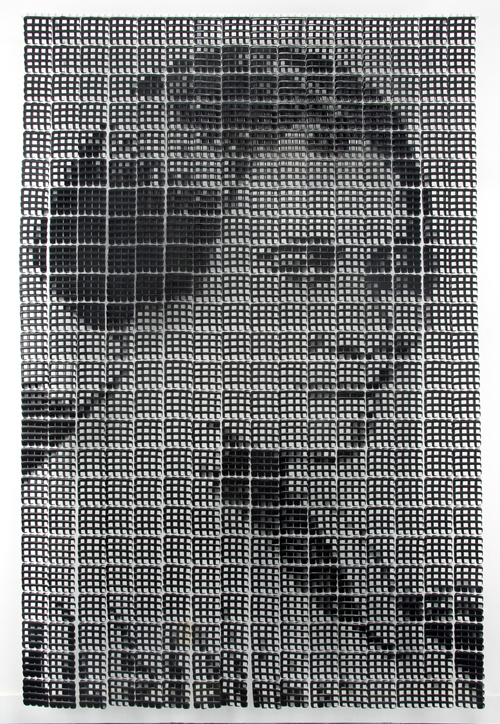 Sonya Clark[vii] has also riffed the pixilated image in her work. ‘Madam CJ Walker’ is an historical image of the renowned African-American businesswoman, entrepreneur and philanthropist, who developed a business empire around hair products for African-American women at the beginning of the 20th Century. Sonya’s black and white image of Madam Walker, seemingly a low-resolution newspaper image, is actually rendered in hair combs – the tools of Madam Walker’s craft. The combs are arrayed in pixel-like sets of 9 combs that have had teeth selectively broken off to render the tonal changes in the image. 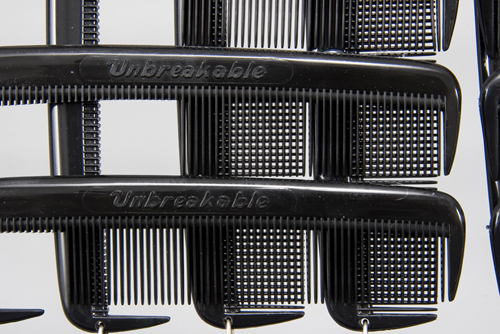 In both of these examples the artists are drawing on the traditions of textiles while looking at the underlying structure of digital imagery to extend the narrative quality of their work.

The final aspect of digital technologies that I find interesting, and perhaps surprisingly contradictory, is their fixedness in time.

Digital technologies aren’t NEW as much as instantly OLD. Using so called ‘new’ digital technology locates an object at a very particular moment in the 20th or 21st century. It freezes the work in time, making ‘time” a more prominent aspect of the work.

It reminds me of how the tapes from an event as important in our history as the original manned moon landing can’t be played because the players for the recording media used at the time have now all been scrapped! And that the original tapes were recycled in the 80’s and recorded over because that kind of tape was no longer being produced.

I have perhaps taken liberties with the strict definition of the term to label this anachronism – that is, an error or frisson around the placing of something within its correct timeframe. Every technology we use has its connection to a moment in time and as artists and designers provocations can be made through ‘messing with the timeline’. 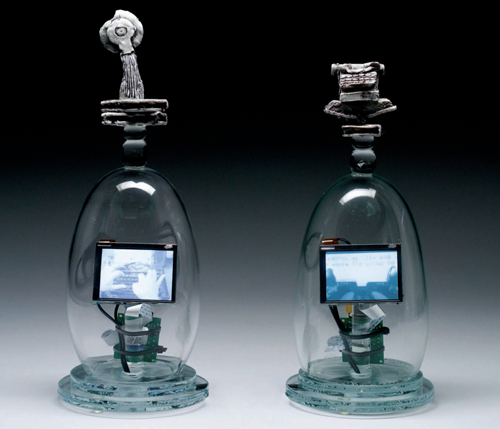 Tim Tate’s[viii] work ‘Virtual Novelist’ encases tiny videos with their technology exposed under hand-blown bell jars, like strange near extinct creatures in a museum case. Today, we are seduced by the tiny screens and their immaculate little narratives, but quite soon those high-tech components will seem strangely outmoded. The implication seems to be that it’s not the novel that is on display as a vanishing species but the technology of the video monitor. 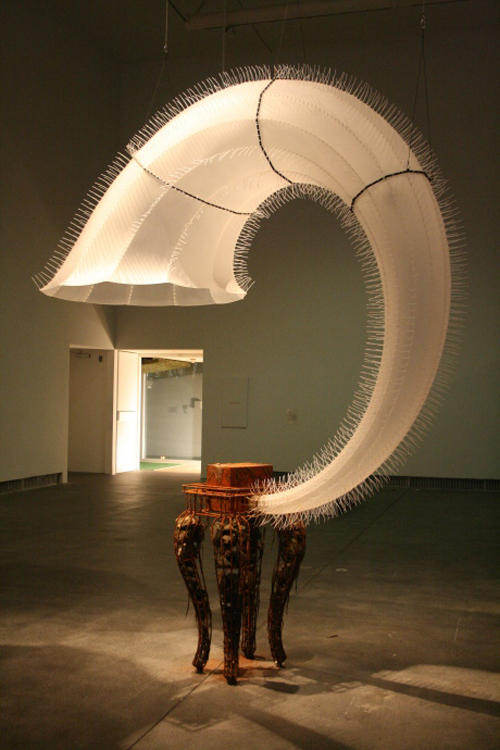 ‘Sounding’ created collaboratively by Lawrence LaBianca and myself also concerns itself with misplaced timeframes. We focused on the ageing of the piece – contrasting the slick, translucent, laser-cut surface of the polycarbonate horn with the eroded and barnacle encrusted steel table that had been dumped in the ocean for a few months. The audio component is an audio loop of a sound that is in essence eternally repeated and never changing – the surge of the surf. This work is based on the Melville’s Moby Dick and we wanted to provoke a feeling of nostalgia and dislocation in time through our use of materials, technologies and sound.

The crafts are often seen as outmoded and behind the times, clinging to technologies somehow inappropriate or rendered quaint by the proliferating ‘new’ technologies. However, clay and glass drinking vessels have been part of human culture for thousands of years. How long will the PET bottle be around for?

Similarly digital technologies while having the glamour of new and cool are arguably more distinctly artifacts of a moment in time. Technologically attuned craft artists are re-contextualizing old and new technologies and in doing so questioning the values we attribute to each.

Many contemporary craft artists in the US are extending their material and technological palette to embrace digital technologies. They see that these ‘new’ technologies have their own inherent values just as do the other materials and processes they traditionally use. The challenge is to understand and become fluent not only with the technologies themselves but the meanings they carry with them.

[i] Assistant Professor at the University of Wisconsin Milwaukee – http://www.fowilson.com

[iii] Curated by John and Penny Smith from the School of Art, University of Tasmania. ‘Convergence’ toured the US in 2005.

[v] Created for ‘Inspired by China’ at the Peabody Essex Museum, Salem.

[vi] Professor at the California College of the Arts – http://www.liacook.com